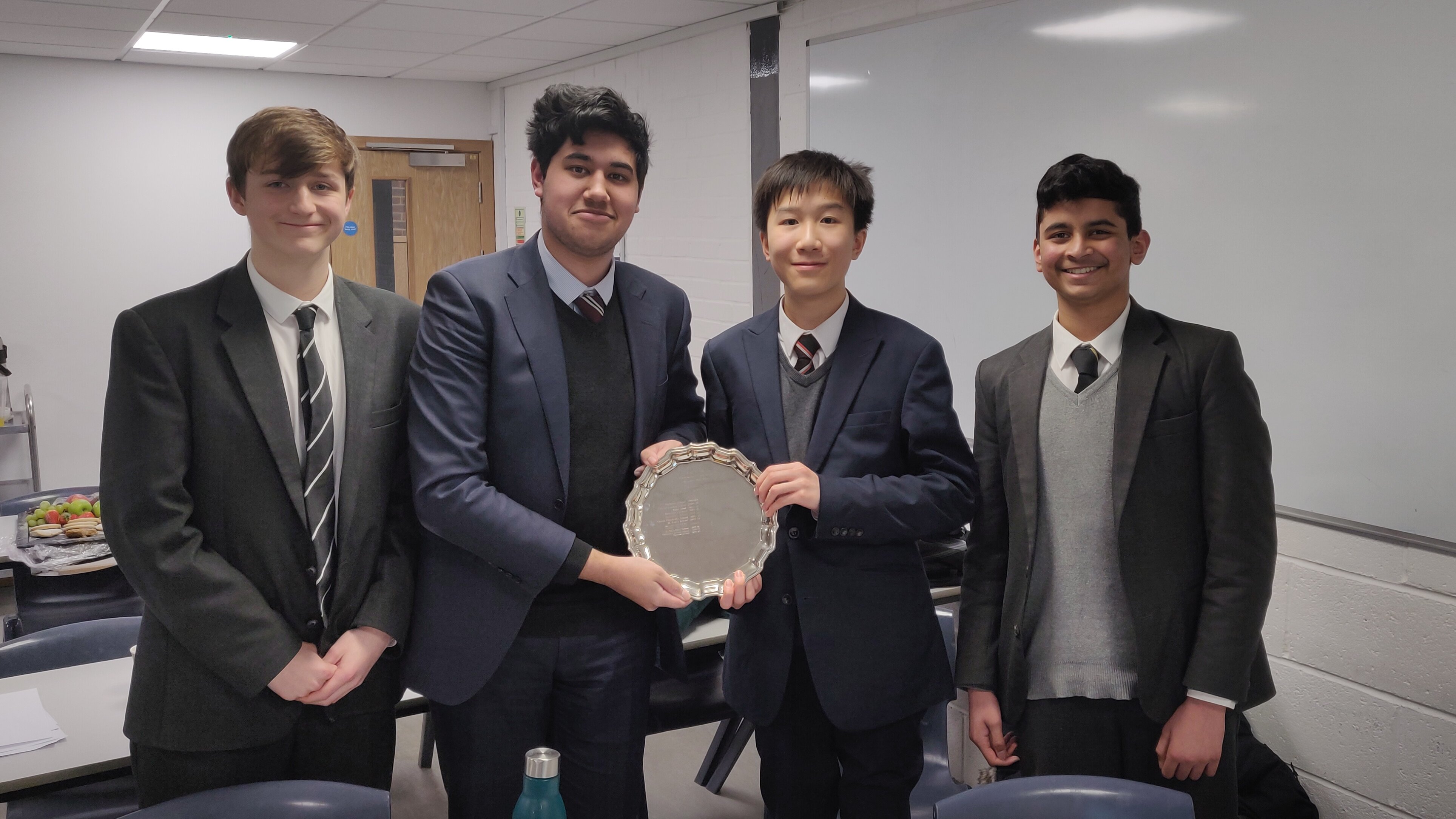 Last Wednesday a select group of mathematicians travelled to their first face to face contest in the Hans Woyda Mathematics competition since January 2020. The decision to compete virtually brought unique challenges but facilitated the continuation of a unique platform for talented mathematicians to showcase their skills in a competitive environment. The Team performed exceedingly well in the online group stages and secured entry to the knockout stages of the Northern Section Plate with victories over Royal Grammar School High Wycombe and Berkhamsted School in the autumn term.

Virtual battles ensued throughout the spring term with successive victories for the boys against Chigwell School in round one of the knockout stages and an extremely cagey affair in the semi-final against Latymer Upper School (previous winners of the Plate). Latymer took an early lead and maintained their advantage in all but the last round; an exciting finale to every match which pits each member against their counterpart in a head to head race. Amazingly, MTS converted a 17 – 15 deficit to a 17 – 25 victory with a flurry of fists first to the buzzers, conceding no ground to their opponents in any question.

On Wednesday 9th March Jude Collings, Moses Ng, Aayush Pandit and Samuel Williams boarded the school minibus to represent the requisite year groups in the Northern Section Final against Queen Elizabeth School, an establishment with a very strong history in the competition. The boys kept focus after a delayed start to make for a nail biting opening. The starter round finished at 6 points each and was followed by a further deadlock in round two, 12 apiece in total.

It was in the probability section of round three where the team made the early breakaway. The round is played in two halves with maximum points awarded for a correct answer for Team A but a bonus ‘steal’ point for Team B, should Team A answer incorrectly. The roles are reversed in the latter half. Sam led the charge, maximising his tally by answering his question correctly and stealing his opponent’s question. Further steals by Aayush and Moses manifested a 7 point lead by the end of the round. From this point onwards the boys navigated The Team, Calculator and Algebra rounds with clinical efficiency, keeping pressure on QES with marginal gains in each.

Then to the climactic race round where results are won and lost. Aayush and Jude were quick off the mark for their questions but kudos must be shown to Moses for exceptionally quick responses in both his questions. He had answered each challenge before the rest of us had finished reading them. I had a marked empathy for the poor chap in the opposing seat who could do nought but tip his proverbial hat in mutual respect.

Moses’ 10 correct answers from a possible 11 was an incredible display and certainly laid claim to the man of the match performance. Jude as team captain was presented the 2021-22 ‘Heard Collins Plate’ by Mr Ironside who had come especially to host the match as quizmaster. His 40 year contribution to the competition certainly provided a sense of gravitas.

I wish to thank each of the team members for an outstanding run and a wonderful exhibition of talent by each in the final. It was a pleasure to see the boys excel and bring home the plate, which awaits engraving and storage in the school trophy cabinet. However, special thanks must be awarded to Aayaan Patel, Isaac Taylor Cummings and George Wilkinson for participating in earlier rounds and to the very many boys who participate weekly in the Hans Woyda Maths Club. Without their continued support and engagement we would not be able to practice requisite skills and foster an environment which celebrates their enjoyment of Mathematics. I look forward to seeing you again on Monday.

Finally, if you can answer the following in under 2 seconds you may have pipped Moses to the player of the match.