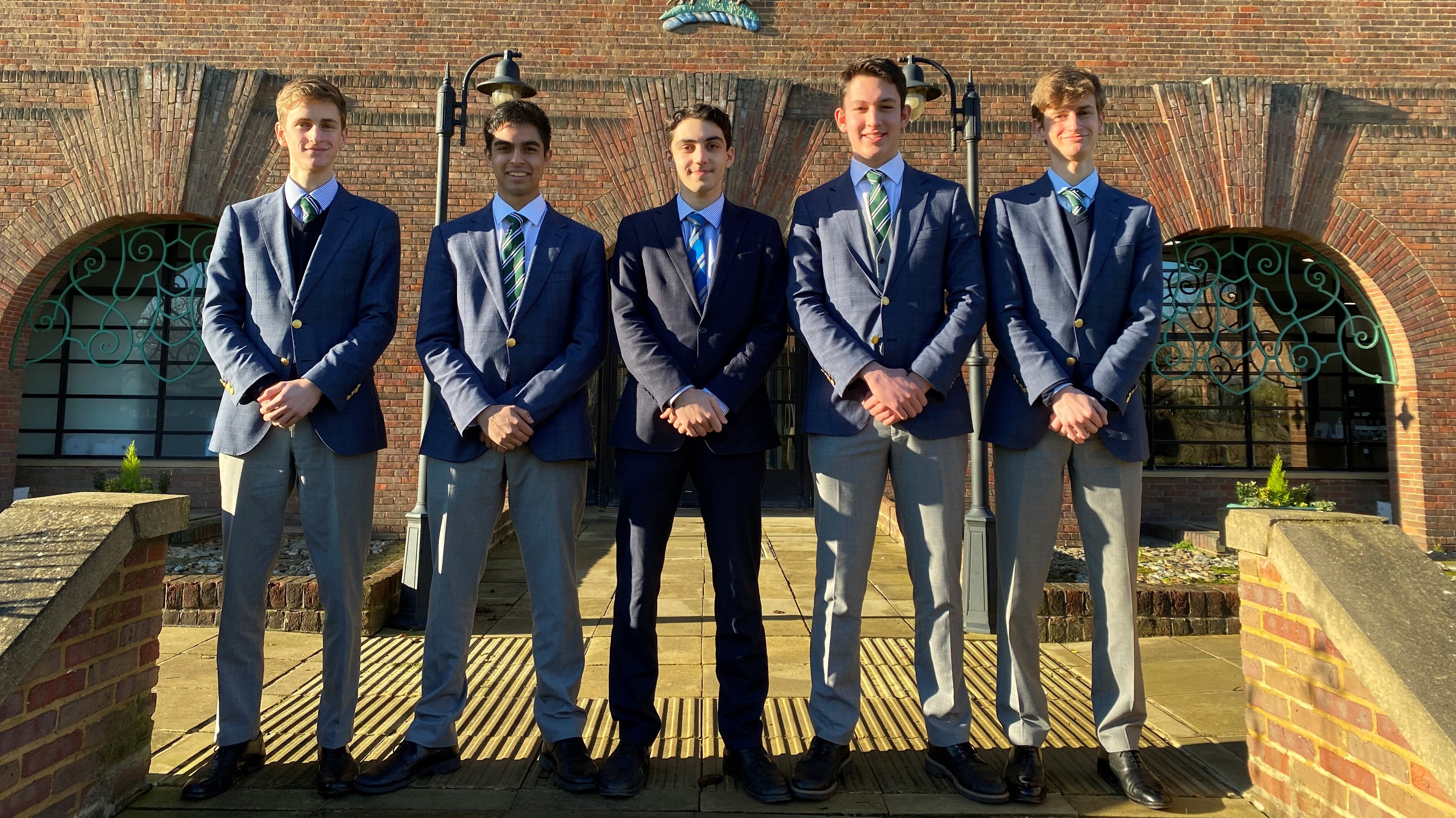 Upper Sixth historians, Alexander Tillotson, Dominic Tillotson, Ali Yaqoob, Eben Terry and Kardo Beck who have all been recognised in each of Oxford and Cambridge’s leading essay prizes.

This remarkable (and yet annual) achievement on the part of Taylors’ boys is a reflection of their talent and commitment, shown most clearly in both the technical craftsmanship and eclectic focus of

Eben Terry’s highly commended essay for the Robson Prize focused on the knightly class in the thirteenth century. Reassessing previous historians’ views, he argued against the assertion that the knightly class was in social and economic crisis. Instead, he suggested that it was a time of significant transformation for England’s knights, as they became a smaller elite that expressed its identity through chivalry and tourneying.

Ali Yaqoob’s commended essay for the same competition focused on how the 'ideological' way of thinking was dependent on the intellectual legacy of the Enlightenment and French Revolution, spread across Europe by Napoleon. The 'rise of ideology' was a reaction to the 'civil society' that the French Revolution established, a reaction made necessary by the Congress of Vienna in 1815, as conservatives were restored to positions of authority. The ideologies that developed represented the interests of distinct social groups, who each began to identify an ideal construction of society.

Alexander Tillotson’s essay was also commended and sought to determine the difference between an uprising and a revolution in nineteenth-century Europe. Though the uprising as a form of social and political transformation held its own traditional identity, the emergence of revolution as an alternative mode of political transformation redefined the former’s nature. Revolutionary political violence challenged the political order, yet the violence of uprising was mere activism within traditional political boundaries. Whilst revolutionary moments fundamentally re-ordered society, the limited social change directly attributable to an uprising was indistinguishable from broader social and political developments of nineteenth-century Europe.

Mirroring his brother, Dominic Tillotson’s commended essay for the same prize also focused on the differences between uprisings and revolutions in nineteenth-century Europe. However, Dominic departed from Alexander in arguing that uprisings were separated from revolutions by their fundamentally reactionary nature. Tillotson’s essay also highlighted the importance of truly popular support and its relationship with the political and social context, which was not present in an uprising, but underpinned much of a revolution’s outcome, seen most clearly in the Paris Commune of 1871.

Meanwhile, Kardo Beck was commended in the Julia Wood Prize for his essay challenging previous interpretations of America’s period of Reconstruction, arguing against traditional narratives blaming the failure to create a new, biracial society in the South following the American Civil War on corrupt politicians and Northern apathy. Instead, Beck highlighted the contingency of Reconstruction’s failure, focusing on the 1873 financial, which lowered Reconstruction’s salience, exposed the instability of the Republican coalition, and emboldened Southern whites. Financial depression vindicated conservative cries for fiscal prudence, brought Democratic victory in the Congressional elections of 1874 and hastened Northern disillusionment with Reconstruction.

Due to popular demand, both our September Open mornings are fully booked. Our Summer Open Morning is currently set for May 2022.